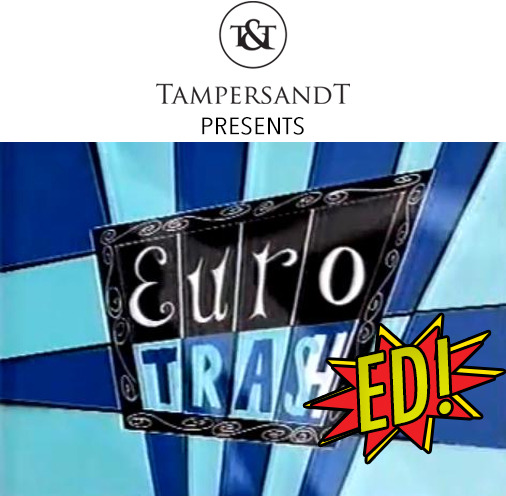 Flashback to the early 90’s. Yeah there were people with green hair and ripped jeans feeling sorry for themselves. Yeah Will Smith used to be funny. And Yeah you can jump higher if you inflate the tongue of your trainers.This was the backdrop to what TampersandT the force behind EuroTrashed grew up on.

Whatever it was, T (Rohan Tully) film Director and T (Tarek Sebastian Al-shammaa) Head Chef at Pinewood studios didn’t count on the sheer laughs they had recounting the show and its hilarious moments.  They both love French cuisine but have had enough of the pompous frivolities of their dining rooms. They wanted to imagine Le Gavroche but run by Antoine, Jean Paul and Lola.

They wanted to have an immersive experience for their diners and decided to combine, fine dining, outrageous entertainment set in original surroundings.   The menu is starting with Antoine’s heritage, France, and we will use Eurotrashed as a backdrop to visit the world culinary delights, changing the menu and entertainment as we go.

The event itself is being held in a film studio with a full set being built and we are looking for an audience to take part in the broadcast of our show, Eurotrashed, so please book your seat prepare your taste buds

The menu will be an exploit of French cuisine as well as other cooking techniques. This particular menu will be mainly fish and being an island we have some of the best produce in the world. We promise that all our scallops will be hand dived, all our prawns ethically sourced and our langoustines and Salmon to be Scottish and proud. The pride of the menu is a dish famous in the south of France but rare to find here in Britain. The starter will be light and refreshing and yes it’s a EuroTrashed night so will finish with a Tart. And we do love a Tart here at TampersandT.

Upon arrival, you will receive complementary cocktails followed by a 3 course meal.

Also, from the man that brought you, Ghostbusters, The Blues Brothers and Ghostbusters 2. Dan Aykroyd's Crystal Head Vodka will be putting together a specialised complimentary welcome cocktail as well as a digestif concocted to go with your Euro Trashed meal.

For more information on this event contact the organiser:
info@tampersandt.co.uk
You are buying your eTicket from:
TampersandT
26 Macroom Road Maida Vale W9 3HY