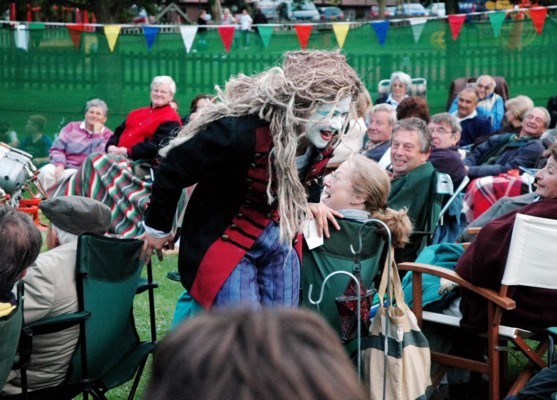 It is London, 1924, and rich and powerful tycoon and former East End barrow boy, Sir Arthur Cattermole, is not happy. His son, Gerald, whom he has spent his hard earned brass on to go to Eton, is in love with the girl next door, the beautiful Isabelle and daughter of hard up doctor, Cornelius Truss.

Love is a bunch of roses! Money is the thing!

So he sends Gerald to Africa to look after his cocoa business.  The young lovers, of course, are heartbroken. The days pass like falling leaves and after a year no letters have come from Gerald. Isabelle is convinced he doesn’t love her anymore, or has found someone else, so decides she will become a nun and live in Bexhill-on-Sea. But the widowed doctor’s housekeeper, Elsie, who has virtually mothered Isabelle, has a plan. She knows a kind, good, gentle man, a commercial traveller, who will marry Isabelle and once married Sir Arthur will have no reason to keep Gerald away. Of course, Isabelle will have none of it at first, but Elsie persuades her mistress to trust her – that this complex knot of impossibilities will be unravelled. She will eventually be happy.

Then shockingly Elsie disappears into the London fog and is apparently found dead. Her devoted husband, Albert, Sir Arthur’s butler, is devastated. A month passes and the commercial traveller, Cecil Cornford, does indeed turn up and marries Isabelle - and then, apparently too late to marry her himself, Gerald returns from Africa incognito. His letters had been intercepted and he does still love her. Albert sets about unpicking the knot and bit by bit it is unravelled.

Funny, romantic and moving the play demonstrates the gritty determination to overcome an apparently unassailable problem through absolute love.

Bring your own chairs and warm clothes. It can get cold. Open an hour and half before the show starts. The show is aimed at adults, but mature children will enjoy it. Do not bring babies. However much we love them, they do distract. We do not continue in heavy rain. If the show is cancelled before curtain up money will be refunded; if we cancel once the show is under way money will not be refunded, but you may come free to any subsequent performance as long as you re-book.