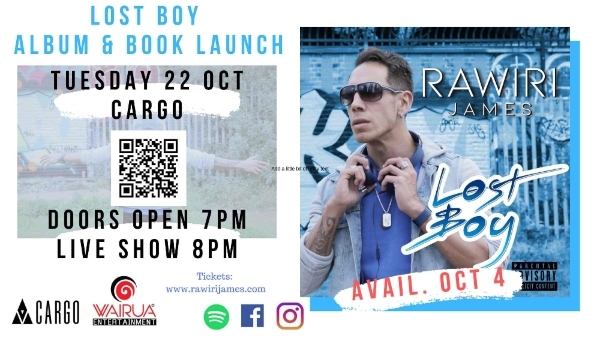 Buy tickets and get Lost with Rawiri James!

As the official album and book launch of Rawiri James' Lost Boy, industry and media reps will be in attendance at this event so dress to impress!

Doors open at 7pm, with a DJ kicking off the proceedings before the live show gets underway approximately 8pm. Rawiri will be performing the entire album over the course of his set so you don't want to miss out! DJ will pick up again around 10.00pm until the event close at midnight.

The bar is also open from 7pm and there will be food served on the night. Rawiri has also designed an official Lost Boy beverage for the event - both alcoholic and non-alcoholic - which you should definitely try!

Admissions are strictly 18+ and we follow the guidelines of our venue, Cargo.

We also recommend getting to know the album so that you can sing along on the night! Lost Boy is available on pre-order on iTunes NOW and will be released on Friday October 4. Head to http://www.rawirijames.com for more!