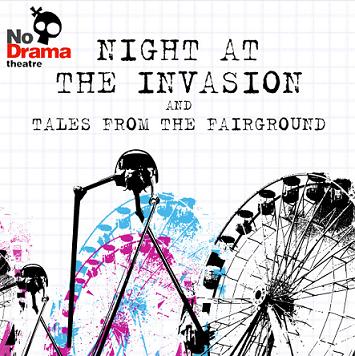 NoDrama - Night At The Invasion

For our inaugural production, two plays

Tales From The Fairground:

Tale 1: Two people, best friends for years, meet and in a revealing ten minutes their friendship is left vulnerable and exposed
Tale 2: It's hard being an out of work actor in a dog eat dog, friend eat friend critic obsessed world
Tale3: Two strangers meet and connect on a ferris wheel in a poignant tale of the road not taken

Night At the Invasion

In 1938, the world was on the up, industry was growing and the population was blissfully unaware of the looming great war. Families would congregate in the evenings around the mandatory wireless for reliable information and entertainment. The wireless could always be trusted.

October 30th, 1938, Orson Welles first broadcast the radio play, "The War of the Worlds". What was supposed to be a clever Halloween broadcast quickly turned into a scandal the type of which had not been seen before. Crowds flocked to the scene at Grovers Mill to welcome the 'unknown visitors'. Police sirens and flashing lights only served to heighten the paranoia. Only as the show neared its finale, did the cast, producers and Welles himself see the full extent of the effect their ‘little production’ had had on its believing audience. Over the course of the next few months over 1200 articles would be written about this episode.

Was this a cruel premeditated hoax or artistic vision at its subversive best?

For the first time we enter their world. What of Welles and his conspirators? In this imagined account of that night we witness the struggle between the artist and the advertiser. How does an artist retain his integrity while attempting to keep the money-men happy? We meet the cast and crew behind the events that changed the rules of broadcasting forever. And the ego that sparked it all.

Join us, for a Night At The Invasion!

For more information on this event contact the organiser:
contact@nodramatheatre.com
You are buying your eTicket from:
No Drama Theatre
2 Geraldine st. Phibsboro Dublin7